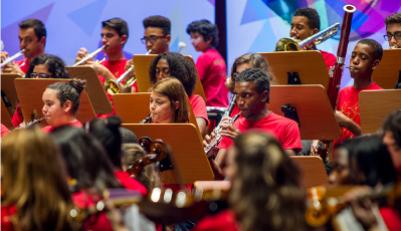 The “Orquestra Geração” is a project of social intervention through music, orchestra mainly, and was founded in 2007 in the school called Miguel Torga in the city of Amadora, near Lisbon. We are active now in 22 schools around the capital -  Almada, Amadora, Lisbon, Loures, Oeiras, Sesimbra, Vila Franca de Xira (Vialonga Orchestra) and Coimbra. We apply in Portugal the methodology of El Sistema founded in Venezuela by Dr. José António Abreu (Prince of Asturias and Erasmus prizes). We work with children and youngster from Kindergarten (The Affections Orchestra) till University (Geração Youth Orchestra). The Orchestra has been awarded the following distinctions: 2010 – National Teachers Prize (Ministry of Education), in 2013 and 2014 – was considerate one the best social projects in all EU, in 2017 one of the prizes of Foundation Mota Engil (Oporto) and in 2918 was considered by AGEAS as the best social project of the year and was given the gold medal commemorating the 50 th anniversary of The Universal Declaration of Human Rights by the Portuguese Parliament.  Orquestra Geração is a member of Sistema Europe and sits on its board.